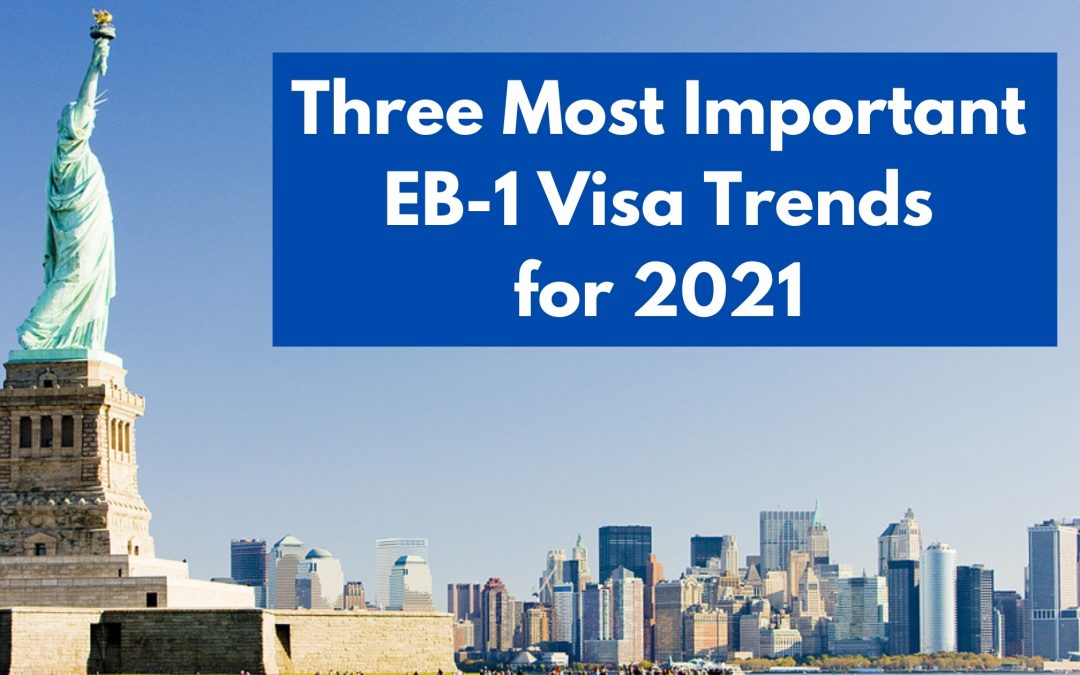 A lot is set to change for EB-1 visas, and immigration in general, in 2021. Much was thrown off in 2020 due to the coronavirus pandemic and the tightened immigration restrictions that followed in the United States. In 2021, though, it appears that the new administration in the White House is poised to provide significant improvement for those seeking a U.S. employment-based visa under the EB-1 program.

Here are the three most important trends for EB-1 visas in 2021.

It’s no secret that immigration U.S. immigration policy tightened under President Donald Trump. Protecting America’s borders was among his highest stated priorities since he was campaigning to become president before the 2016 election. When the coronavirus pandemic began, the Trump administration acted to control the U.S. borders even more and the invisible wall cut off opportunities for many viable immigrants.

In April 2020, an executive order he signed restricted new green card applicants. Two months later, he restricted entry of people who held an H, L or J visa as well as their dependents who weren’t physically in the United States at the date of the proclamation.

The impact of the invisible wall extended to the EB-1 Visa as well.  RFE and Denial rates for I-140s increased across the board over the last two years with USCIS plainly applying a heightened standard for approval of the EB-1 in particular despite no corresponding specific change in the regulations to justify such a shift.

With the inauguration of Joe Biden, a new administration enters the fray with a promise to ease regulations on immigration and promote provisions or immigration benefits. While definitive details are not available yet, Biden has promised to rollback much of Trump’s immigration policies. This reportedly includes easing policies at USCIS and will likely address the discretionary determinations concerning adjudication of I-140 Petitions on EB-1s.

While Biden has publicly said he intends to be aggressive in overturning some of Trump’s policies within his first 100 days in office, changes in the adjudication structure of the EB-1 visa program are likely to happen slowly over time.

Doris Meissner, who serves as the director of U.S. immigration policy for the Migration Policy Institute, told the Society for Human Resource Management  “Given the incoming administration’s focus on responding to the COVID-19 pandemic, much of Biden’s early political capital may be invested outside the immigration realm.” Then again, the Biden Administration has repeatedly reiterated its desire and commitment to the immigration so it is difficult to state with certainty how this will play out.

2. USCIS EB-1 Visa Focus Will Remain on Quality over Quantity though a more reasonable standard will likely be applied.

Even if the Biden administration does shift the adjudication criteria back to Obama-era levels, it’s unlikely to simply approve all applicants. However, it seems likely the EB-1 criteria will be applied in a more even handed manner.

The regulations provide that in the event that the EB-1 applicant has not won a significant one-time achievement (such as an Oscar, Emmy, Grammy Award, or a Nobel Prize) the applicant must meet at least three of the 10 criteria laid out but USCIS.  Specifically the criteria include:

Under the dictates of the Trump USCIS, an exceptionally heightened standard was set regarding many of these criteria to exclude applicants who would have previously been successful.  In particular, demonstration of “high remuneration”, receipt of nationally or internationally recognized awards and serving in critical roles at a distinguished organization were interpreted in a fashion where very few could qualify. It would appear the Biden Administration is poised to return these standards to the Obama-era levels and allow for a more even handed approach to adjudications.

The goal of USCIS and the United States in general is to bring immigrants to America who can contribute in a substantial way to the country. The Biden administration may view this as more important than the Trump administration has, but it doesn’t mean that they will all of a sudden abandon the mantra of “quality over quantity.”

Charles Oppenheim, the U.S. Department of State’s chief of the Visa Control and Reporting Division, provided a recent update on EB-1 visas worldwide. He said that for the majority of countries, the visa remains into 2021 and will be that way for at least the next several months.

Countries such as China and India actually got some good news, too, in regard to their final action date. Oppenheim explained that the final action date for India and China are now the same, “because they have both reached their per country limits and are now utilizing ‘otherwise unused numbers’ from the EB-1 category as well as numbers that have ‘fallen up’ from otherwise unused EB-5 numbers.” As of January, 2021 Indian and China were at September 1, 2019 for EB1 Final Action and November 1, 2020 for Dates For Filing.

Colombo & Hurd offers a range of services to foreign nationals seeking to immigrate to the United States.  This includes guiding clients on the best visa option for their situation and assisting them with the visa process through green card issuance.  Several of our attorneys have extensive experience with the EB-1 Visa process and we have obtained a significant number of approvals over the last several years.  Contact one of our offices today at (407) 478-1111 for Orlando, (305) 455-0590 for Miami or call us in Tampa at (813) 444-1114.  You can also reach us online anytime.